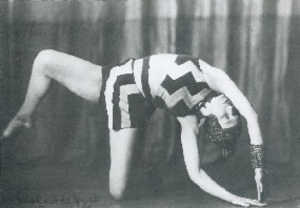 After her first dance lessons at the age of 13, Marguerite Acarin studied in Brussels with one of Émile Jaques-Dalcroze’s students and joined the corps de ballet of the Antwerp Opera. In 1922, she attended the conferences of Raymond Duncan, Isadora Duncan’s brother, where she met painter Marcel-Louis Baugniet for whom she became a model and married in 1923. The latter, involved in the Constructivist movement, an abstract painter interested in the applied arts, invented the dancer’s stage name and drew costumes for her, a collaboration which continued punctually after their separation in 1928. In 1937, architect Jean-Jules Eggericx built a theatre for her in Ixelles, which closed its doors in 1957. She then devoted herself to sculpture and painting, dance being a regular theme in her plastic works. She composed about 50 choreographic pieces, most of which she performed herself, in Belgium, in theatres or private homes and in her own theatre from 1937 to 1957. She called upon the music of her contemporaries including Milhaud, Poulenc, Schmitt, Stravinsky, Ravel. Combining rhythmic dynamics and hieratic poses, she developed a principle of kinetic scenes where costumes and sets echo Baugniet’s ideas: “The virtue of form is in her rhythm”. In her synthesis of the arts project, plays of lines, patterns and colours construct assonances and dissonances in a dance regarded as “architecture-music”. A great figure of the Belgian avant-garde between the two World Wars, she was honoured at the end of her life by two films: “J’aurais aimé vous voir danser, Madame Akarova” ([I would have liked to have seen you dance, Madame Akarova], Michel Jakar and Thierry Génicot, 56 min, 1990) in which she explains her gestures and confronts them with those of young Belgian choreographers; “Akarova/Baugniet, l'entre-deux-guerres” ([Akarova/Baugniet, Between Both Wars], Jurgen Persijn and Ana Torfs, 50 min, 1991), a very complete documentary on an abundant period of invention of forms in Belgium.