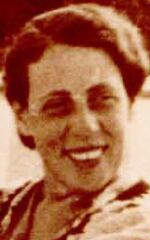 Born into a Jewish family in Budapest, Alice Balint was Vilma Kovács’ eldest daughter. After her parents’ divorce, she was raised in her father’s house for a few years, who was often absent, with her brother Ferenc and her sister Olga, by a half-mad servant. As a teenager, she joined their mother, remarried to Frigyes Kovács who, upon the father’s death, adopted all three children. She studied ethnography and met Michael Balint, then a medical student, with whom she took a course in mathematics. She introduced him to psychoanalytic theory by lending him two books by Sigmund Freud, “Three Essays on the Theory of Sexuality” and “Totem and Taboo”. The existing political situation – the passing of two revolutions: first Bolshevik, and then fascist, and the anti-Semitism that prevailed with the introduction of numerus clausus at university – blocked any career project. They married in 1921 and left for Berlin. She studied anthropology and trained at the Berlin Clinic, while he was an assistant at the Institute of Organic Chemistry where he was preparing a thesis. She returned to Budapest in 1925 and gave birth to a son. She did another analysis with Sándor Ferenczi and became a member of the Hungarian Association. As a renowned analyst, she led an active policy of scientific meetings between analysts in Budapest, Prague and Vienna. Her friendly relations with anthropologist and analyst Géza Róheim also provided her with the opportunity for comparative scientific debates which later enriched her articles. She participated in the founding of the Budapest Clinic, which opened in 1931 and where she received patients. Interested in the folklore of Central Europe, in particular that of the Gypsies, and by that of the Amerindian peoples whom she knew only from afar, A. Balint very quickly devoted herself to children as a people. And it is mainly as a children’s analyst that she is representative of the Budapest School. She developed the research, initiated by S. Ferenczi, on early childhood education and on the notion of “good environment”, which will be taken up by Donald Winnicott. She established friendly relations with Anna Freud. She published numerous articles on practical topics for which parents were eager to answer, such as “sucking their thumb”, “modesty”, “bad words”, “masturbation”, “telling stories to children”, “informing the child”. Filial love remains at the very heart of her research. Her highly acclaimed article on “Love for the Mother and Mother Love” (1965) develops the problem of mother-child symbiosis that will influence M. Balint in the development of his concept of “primary love”. Finally, “The Psycho-Analysis in the Nursery” (1932) is an introduction to the care of the very young and the functioning of the child psyche. She co-wrote with Michael Balint “Transfer and Counter-Transference” (1939), which remains the very first article on this subject. Just before World War II, at the end of 1938, before her husband did, she left with their son in exile for Great Britain.