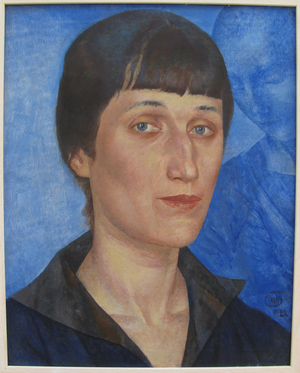 Anna Andreevna Gorenko was born near Odessa in 1889, but the following year her family moved to Tsarskoye Selo, near St Petersburg. It was in reaction to her father’s scepticism about her poetry that Anna chose her great-grandmother’s name, of Tatar descent, as her pseudonym. She studied at Tsarskoye Selo High School, indissolubly linked to the name Pushkin, where she met Nikolai Gumilev in 1903, who became her husband in 1910. She began writing poetry at an early age, under the influence of Russian poets Valeri Brioussov, Alexander Blok and Innokenti Annenski, whom she considered her master, but also Baudelaire and Verlaine. In the spring of 1910, she stayed in Paris, where she met painter Modigliani, who then drew her famous pencil portrait. Until 1917, she spent every summer in the Tver region. There she discovered Russian landscapes, peasant life, popular language, her sources of inspiration. In 1911, she joined the Guild of Poets, which in 1912 became the Acmeist group. They defended tangible reality in poetry, as opposed to Symbolists. Anna Akhmatova’s first collection, “Evening”, partly served as poetic basis for Acmeist statements. In 1912 her son Lev was born, who became a famous geographer and founder of ethnological theory. Akhmatov’s fame grew after the publication of her collection “Rosary”, (1914). Poets such as Marina Tsvetayeva, Vladimir Maïakovski, Boris Pasternak praise her art. Her lyrical poetry, sometimes evoking the epistolary or diary genre, also echo an entire era. After the revolution, she did not emigrate, but she was still considered by the authorities as a poetess from former Russia, until Jdanov’s criticism in 1946. While it became difficult to get published, Akhmatova wrote numerous Pushkinian studies. During the terrible 1930s, repression affected her family: her son was arrested and deported. The tragedy of the Russian people, which was also her personal tragedy, is the subject of her long poem “Requiem”, which was not fully published until 1987. During World War II, she wrote famous patriotic poems; she also worked on her great “Poem Without a Hero”, a complex work in composition and figures, an epic and lyrical fresco embracing times and places, from 1913 to Russia’s struggle against Nazism. As from 1953 her work began to be published. In 1964, she received the Etna-Taormina Prize in Italy, and in 1965 she became an honorary doctor of Oxford University. In 1965 her last collection “Bieg vremeni” [The Flight of Time] was published, allowing readers to discover her work. Anna Akhmatova died the following year near Moscow.