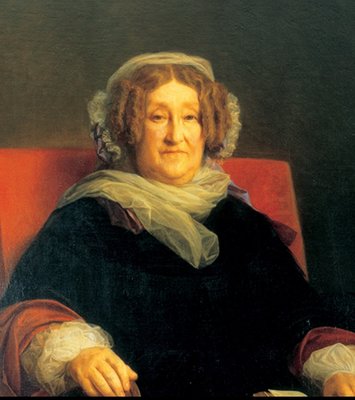 The Veuve [Widow] Clicquot was one of the first modern-day businesswomen and the first woman to run a champagne house. When her husband, François Clicquot, died in 1805, she inherited the family wine business founded in 1772, which became, under her direction, an international champagne house to which she gave her name: Veuve Clicquot-Ponsardin. She dared to send wine representatives such as Louis Bohne  throughout Europe during the troubled times of the Napoleonic wars, particularly in the face of the continental blockade. She was very successful on the Russian market in particular, where she outperformed her competitors. Édouard Werlé, who joined the company in 1828 as a commercial employee, became her commercial director, then her partner, and contributed greatly to the development of the company. Veuve Clicquot also became passionate about cellar technology and invented the riddling table, which helps obtain clearer wines. She thus designed the first modern champagne. Little by little, she acquired vines among the best vintages, building up an exceptional wine-growing heritage, and had the Château de Boursault (1842-1849) built for her daughter. When she died, the company sold 750,000 bottles in numerous countries. In 1972, the Veuve Clicquot-Ponsardin company created the Veuve Clicquot prize in her honour, which rewards women entrepreneurs.