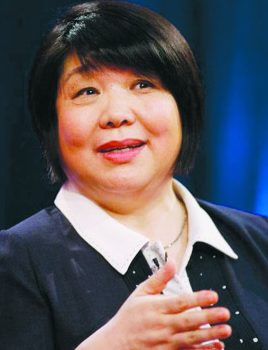 Bi Shumin comes from a family of military officers and completed her secondary education in Beijing. She then joined the army in 1969, and was sent to Tibet where she remained for eleven years as a nurse and doctor. Once married and back in Beijing, she worked as a clinic manager in a factory hospital, but the need to recount her Tibetan experience prompted her to write, at the age of 34, her first short story, “Kunlun shang” (“dead in the Kunlun”), whose publication in 1987 had an immediate impact: the author narrated a gruelling military march on the Kunlun mountains, glorifying the strength of mind of the young soldiers. She continued to publish short stories in the same heroic idealistic vein, then, in 1991, devoted herself exclusively to writing. In the meantime, she studied Chinese literature and psychology at Beijing Normal University, and practiced in a firm as a psychologist. A winner of some 30 literary awards and an influential writer, she is currently vice-president of the Beijing section of the Chinese Writers’ Association. The novelist has produced an abundant work, through which she brings an original eye for the world, which comes precisely from her triple skill, particularly her experience in hospital. Compassionate towards others, endowed with a sense of justice and responsibility, she succeeded in merging the clinical observation of a doctor with the humanism of an author, which gave her writings a sublime element and a positive realism, very different from the plaintive or accusatory literature of her time. For example, the short story “Shengsheng buyi” (“a constantly reborn life”, 1995), which the author calls “a tale of life”, describes the maternal instinct of a young woman who manages to conceive new life by risking her own. In another short story, “Yuyue siwang” (“rendez-vous with death”, 1994), which critics have included in the so-called “new experience” movement, and which contributed to her first national reputation, she addresses, through the style of a report, the taboo subject of end-of-life patients and their families; she tries to show that one can prepare for death and work on mourning with dignity. The same is true for her novels, which are as much praise of life as they are scientific descriptions of often fatal diseases. Her first novel, “Hong chufang” (“prescription in red”, 1997), evokes drug addicts at a rehabilitation centre. The author continues her humanitarian and cathartic mission with “Zhengjiu rufang” (“saving the breast”, 2003), a contemporary reflection on female identity. Since the publication of this novel, described as “psychotherapeutic”, Bi Shumin has been giving her work a more psychological than medical orientation. Her profession as a psychologist, which she describes in a story entitled “Nü xinlishi” (“woman psychologist”, 2007), has led her to publish a large number of texts, especially appreciated by women readers. As a practitioner, she expresses herself on the daily problems that generate people’s discomfort, and offers, as her latest publications clearly indicate, to “prescribe remedies for the heart” and “decipher the code of happiness”.