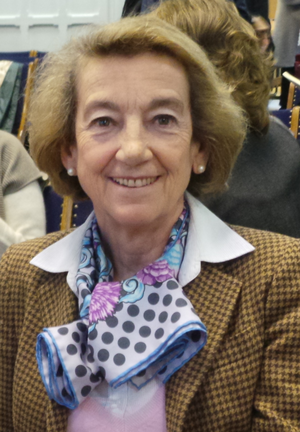 In 1975, Cristina Alberdi created a feminist law collective at the Madrid Bar, El Seminario colectivo feminista. She defended anti-Franco activists imprisoned in Madrid. She published “Aborto: sí o no” ([Abortion: Yes or No], 1975) and “Análisis de la realidad jurídica en torno a la mujer” ([Analysis of the Legal Reality Relating to Women], 1982). At the time of the first free elections in 1977, the seminar, which she led with Angela Cerrillos and Consuelo Abril, engaged in drafting articles in preparation for the new Constitution, aimed at eliminating all forms of discrimination against women. In the end, as they were not invited to participate in the final drafting, these feminists then conducted a very active and political campaign with the editors. They argued that there can be no true democracy without equality between women and men, and that the democratic transition must put an end to the patriarchal and authoritarian system inherited from Franco. Their actions and the mobilisation of the women’s movement, anchored to the left, ended with the inclusion of the principles of equality and non-discrimination on the grounds of gender in the 1978 Constitution. From 1985 to 1990, C. Alberdi was the first woman member of the General Council of the Judiciary. She was minister of Social Affairs from 1993 to 1996, and wanted to reform the laws of the civil and criminal codes that belittled women and defended divorce. In 1995, with Spain holding the Presidency of the EU, she was spokesperson for the Union countries at the UN Conference on Women in Beijing. She demonstrated inflexibility towards threats of regression of rights, which some religious states were making on the international platform published at the end of the conference. She joined the Spanish Socialist Workers’ Party (PSOE) in 1995, was a member of parliament in 1996 and chaired the Madrid Socialist Federation from 1997 to 2000. She left the PSOE in 2003 following political disagreements. In 2004, she was appointed President of the Observatory against Gender Violence in the Autonomous Community of Madrid and became a member of the Madrid Advisory Council. In 2004, almost 30 years after the end of Franco’s rule, President José Luis Zapatero’s (PSOE) decision to establish effective parity within his team and to appoint a woman – María Teresa Fernández de la Vega* – as vice-president, as well as the organic law opposing violence against women (one of the most comprehensive in Europe) and the obligation for parties to respect quotas – enshrined in the electoral law in 2007 – appear to be the culmination of the long process of the fight for women’s rights, as soon as the democratic transition in Spain began.