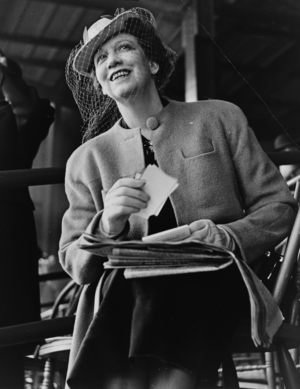 Elizabeth Arden was the founder of a cosmetics empire. She grew up in poverty, in a family of five children, and could not finish high school. She trained briefly as a nurse, and then had various jobs before following her older brother to New York in 1908. Hired as an accountant by the Squibb Pharmaceutical Company, she learned about cosmetology. She then worked for Eleanor Adair, who ran one of the first beauty salons, and then with cosmetologist Elizabeth Hubbard, with whom she opened a salon in 1909. Their collaboration lasted a long time and the entrepreneur, borrowing $600, soon opened her own salon on 5th Avenue, which she named Elizabeth Arden, after her former partner’s first name and “Enoch Arden” a poem by Tennyson. She participated in the 1912 New York suffragette march, then “Every woman has the right to be beautiful” became her slogan. That same year, she travelled to Paris to learn about beauty trends and new facial massage techniques. Upon her return, she marketed modern make-up of her own creation and innovated by offering make-up lessons to clients. She collaborated with chemist A. Fabian Swanson to develop revolutionary creams, the result of the latest research in cosmetics. With the help from her husband Thomas Lewis, she had her own factories. In 1915, the Elizabeth Arden brand became international, and a first salon opened in France (1922). Creating the perfume “Blue Grass” in 1934 and launching into fashion in 1943, the entrepreneur succeeded in developing a complete coordinated offer for a high-end clientele. She was also the first to offer foundation which was adapted to the shades of her customers’ skin. When she died, she left an empire worth more than $40 million behind, which included about 100 salons around the world.