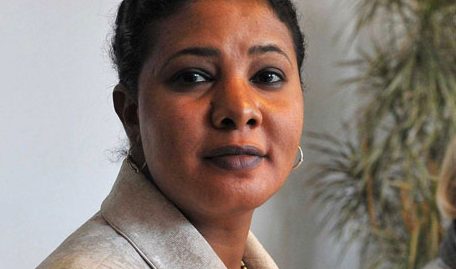 Originally from a poor and traditional background, Loubna Ahmed al-Hussein became, after studying agronomy, an impertinent columnist for a leftist newspaper, which she had to leave in 2007 under the pressure of censorship. In 2003 she married a Sudanese journalist and, prematurely widowed, refused the custom of isolation during mourning. She worked in the communications department of the United Nations mission in Sudan when she was arrested on July 3rd 2009 in a restaurant in Khartoum, along with a dozen other women, for wearing trousers, a forbidden garment. This offence is punishable by 40 lashes under article 152 of the Criminal Code. L. Ahmed al-Hussein refused to plead guilty, resigned from her position in order to renounce diplomatic immunity and, in daily newspaper Al Sahafa, spoke out for the “20,000 girls and women” arrested for clothing reasons since Omar al-Bashir imposed Sharia law in Sudan. She was sentenced on September 8th 2009 to one month in prison in a trial she publicly wished to hold by inviting 500 colleagues, and was released: the Sudanese Union of Journalists, close to the government, paid the fine she refused to pay in order to publicise her fight from her cell. Impelled by her example, a collective, “No to Women’s Oppression Initiative”, was created to abolish iniquitous laws that humiliate women. Threatened, she left the country clandestinely and continues to alert international opinion on the situation of women in Sudan. She wrote a first book where she also talks about her excision at the age of 7, then an essay in collaboration with Djénane Kareh Tager, former editor of Le Monde des religions.