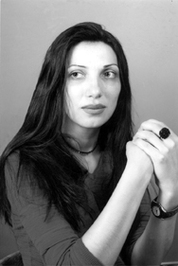 Mimoza Ahmeti graduated in literature from the University of Tirana and made a name for herself with the publication of her first poetic collection “Bëhu i bukur” [Be Beautiful] in 1986. This recognition was confirmed two years later with the release of her second collection “Sidomos nesër” [Especially Tomorrow]. In a literary climate still tense from political events, her freedom to be and to express herself and her sincerity have conquered and won over a large audience of young Albanians eager for the real and the unusual. “Delirium”, published in 1994, consecratds her as a poetess of the senses, never ceasing to surprise with her boldness and her innate rebelliousness. This poetess with a fragrant first name offers a poetry made of feelings shared between raw irony and total self-giving. Named the Albanian Sappho, both suave and tumultuous, provocative as one would wish, M. Ahmeti represents one of the rare authors of her generation to have resisted the grip of politics on art, both before and after the fall of the existing regime. Galvanised by her passion for living and creating, inspired by her “red devil” – the name she gives to her creative inspiration – she introduces into Albanian poetry the prevalence of subjectivity over community control. For her, the creative act consists of both creating and creating oneself. Promoting beauty in its broadest sense and man as naked spirituality, she considers ideology and accepted ideas as the flaws of a traditionally macho society and works to fight them through extravagance, the will of the beautiful, the exuberance of the verb and poetic delirium. Also a painter and editor, she has tried prose, in a type of meditative narrative as particular as the title of her book “Absurdi koordinati” [Absurd Coordinative]. Her poetic texts are regularly quoted in the anthological choices of Albanian poetry.