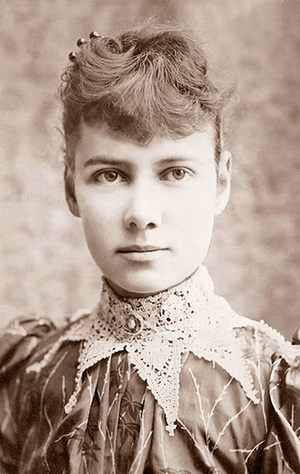 Elizabeth Jane Cochran became a journalist at the age of 18, hired at the Pittsbugh Dispatch after writing a column for the newspaper which she signed as the “Lonely Orphan Girl”. She became a correspondent under the pseudonym of Nellie Bly, the title of a song of the time, and immediately specialised in reports on the living conditions of working women and workers in factories. When her employers assigned her to more traditional areas – gardening, cooking, and fashion – she resigned and left for Mexico, where she sent surveys on corruption and poverty. After her expulsion by the Mexican government, she went to New York and joined the New York World, Joseph Pulitzer’s newspaper. However, she did not achieve fame through social reporting but through a challenge launched by J. Pulitzer: to travel around the world in less than 80 days. N. Bly left on November 14th 1889, and successfully took up the challenge, travelling from boat to train, from omnibus to rickshaw. She did not see much of the countries visited, but her highly publicised trip – thanks to her storytelling skills – provided her with freedom to write which she enjoyed later on. In 1895, she married a millionaire industrialist. Widowed in 1905, she undertook to reform her husband’s company according to innovative social principles (abolition of piece work, founding of a leisure centre for workers, a fishing and hunting club and a library). Nevertheless, she went bankrupt and fled her creditors by travelling to England as World War I was raging. She returned to her job and worked as a war correspondent until 1919. Back in New York, she devoted her last reports to abandoned children (for the New York Evening Journal). She is hailed as a great figure in journalism by the entire American press.