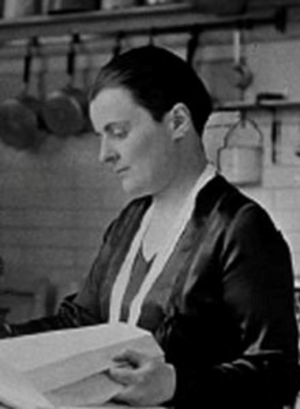 After studying philosophy at university – which was exceptional for the time – Paulette Bernège studied the works of the Domestic Science Movement animators, which consisted in household Taylorism launched and directed in America by Christine Frederick. She became its main promoter in France and urged women to spare their efforts, to eliminate everything that was neither essential nor rational in the execution of household tasks, thus developing “domestic sciences”. She demanded domestic comfort – water, electricity, gas – which then seemed very much like a utopia. She multiplied conferences in France and abroad, published articles, books and brochures designed to develop a “physiology of housing”, borrowing her precepts from the rationalisation of work in industry. In 1923, she founded an institute of domestic organisation in Nancy, supported by Mon chez moi magazine, for which she was the editor-in-chief until 1930. She launched the Ligue de l’organisation ménagère ([League for Domestic Organisation], 1925) in order to revalue and professionalise domestic work, and wrote a report on Household Professions (1926). In reaction against the Minister of Labour and Social Security, L. Loucheur, who drafted a law planning the construction of social housing without consulting the Ligue de l’organisation ménagère, P. Bernège published “Si les femmes faisaient les maisons” ([If Women Made Houses], 1928). In this architectural manifesto, she expressed the “desires and demands” of the women forgotten by the bill, because “we, as housewives, will tell architects and entrepreneurs what they always ignore: what the efficiency of household work consists in”. She also published “De la méthode ménagère” ([The Household Method], 1928) – a best-selling book published four times and translated into several languages – and a book on Financial Relationships between spouses. She created the École de haut enseignement ménager in Paris (1930) and aspired to found an institute of domestic sciences which, due to a lack of budget, would not see the light of day. She maintained relations with international feminist movements. P. Bernège, a pioneer, marked the beginning of the century with her aspiration to promote “forms of social organisation and education based on a scientific understanding of the human mind and body” (Clarke). Her work largely inspired home economics courses and textbooks until 1960 and her influence is undeniable in 1950s women’s magazines. Rationally equipped kitchens are undoubtedly the most visible heritage of her work.