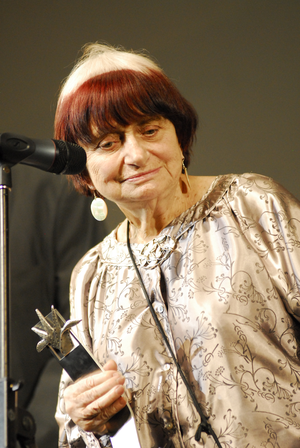 After living in Belgium and then in Sète (southern France), Agnès Varda studied Photography in Paris at the École de Vaugirard, and became a photographer at Jean Vilar’s National Popular Theatre from 1951 to 1961. Without any technical knowledge, and not even a film enthusiast, she made her first film in 1954, La Pointe courte, the story of a couple breaking up mixed with a depiction of a fisherman’s neighbourhood in Sète. Alain Resnais was in charge of editing. A successful first attempt; the film was acclaimed by the critics as a breath of fresh air and won the Grand Prix for avant-garde film in Paris “the grandmother of the New Wave”, which she rejected, because she did not feel part of any collective. Soon after her success, she created her production company Ciné-Tamaris, which helped her establish herself as a “craftswoman” and let her create in complete freedom. She was particularly fond of short films, because she thought they permitted creative impulses to take form more quickly, but she also produced feature films which were many areas of experimentation. She seized every opportunity to capture a story: a commission about the Loire castles (Ô saisons, ô châteaux, 1957) and the Riviera (Du côté de la Côte, 1958), photographs taken during a trip to Cuba (Salut les Cubains, 1963), and an uncle rediscovered by chance in San Francisco (Oncle Yanco, 1967). A. Varda has a gift for turning everything into film and juggling with formats, genres and conventions, making reality and fiction merge through the elegance of a playful subjectivity; for A. Varda looking at daily life is unique, mischievous and generous. Always curious about the other, she celebrates the encounter in all its forms within “subjective documents” (to use her own words), such as L’Opéra-Mouffe (1958, notebook about a pregnancy in the Mouffetard neighbourhood); Daguerréotypes (1975, “filmography of [her] neighbours”, selected for the Best Documentary Oscar); and Cléo de 5 à 7 (1961, Méliès Prize), a feature film about a singer waiting for the results of a medical analysis wandering around Paris in a poetic and anxious state—the form was innovative (we follow Cléo’s day and thoughts in real time) and the themes were courageous (death, the taboo about cancer, the Algerian war); it became a cult film. After Le Bonheur, another daring film, awarded many prizes (1964, Delluc Prize, Silver Bear at Berlin), A. Varda followed her companion Jacques Demy (met in 1958) to Los Angeles, where she hung out with Warhol and his gang. While there she made two films bearing witness to that period (Black Panthers, 1968; Lions Love, 1969). In the years that followed, a high point in the struggle for women’s rights, she directed Réponses de femmes (1975), and L’une chante l’autre pas (1976) which dealt with that struggle with lively wit. The works of this modern filmmaker espouse and shed light on their day and age while her own artistic activity evolved with technical and social changes. In 1985, she was awarded the Golden Lion in Venice for Sans toi ni loi, a reconstruction of the tragic last days of a young vagabond (Sandrine Bonnaire*) using the testimony of people who crossed paths with her; this was a highpoint of her art, and remains to this day her greatest success. After two closely related films with/about Jane Birkin* (one titled Jane B. par Agnès V., 1987) and three others in homage to Demy (including one titled Jacquot de Nantes, 1991), her career took a new turning point in1999. Happily welcoming the new technologies, and seeing in her small digital camera a way of always being as close as possible to her subjects, she directed a very personal work which touched a large number of viewers: Les Glaneurs et la Glaneuse (2000). Invariably using social themes, based on her documentary method of investigation, and her liking for narratives with abrupt switches, she went to meet people struggling wittily and ingeniously against precariousness. In 2008, she made Les Plages d’Agnès, a self-portrait going back over her work and her life, for which she was awarded the César for best documentary film. Having become a visual artist, she also expressed her world in installations, including L’Ile et Elle, which was shown by the Cartier Foundation for Contemporary Art in 2006 and Les Cabanes d’Agnès, which was exhibited in 2009 at the Lyon Biennale of Contemporary Art. As an internationally recognized artist, she has received a host of prizes and distinctions, including the René-Clair Prize from the French Academy, which rewarded the whole of her oeuvre in 2002, and the Carrosse d’Or (awarded by the Society of Film Directors) at the 2010 Cannes Festival; among her most prestigious awards is the Palme d’honneur, which she was the first woman to receive in 2015 in Cannes.