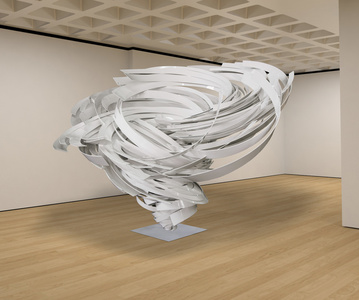 While a student at Hunter College in New York, Alice Aycock attended the classes of Robert Morris, whose work would leave a deep impression on her. She was part of a new generation of artists breaking away from formalism and purist abstraction, championed by the American critic Clement Greenberg. Preferring a “postmodern” approach, and influenced by the concept of “sculpture in the expanded field”, as theorized by the American critic Rosalind Krauss*, she questioned the inclusion of works in the landscape and their close links with architecture. Spurred on by the land art artists, she produced her early works on a monumental scale: large enigmatic machines, often with motors, or driven by electric mechanisms. In the early 1960s, well removed from established artistic hubs, her installations reflected about notions associated with the essence of sculpture: the solid, the void, space and time. In A Simple Network of Underground Wells and Tunnels (1975), the artist dug a series of six wells linked by tunnels, which visitors were invited to climb down into. Plunged into the darkness of the maze, she re-thought the supremacy of the visual and got visitors to undergo a “physical” experience of sculpture. Greatly influenced by Thomas Kuhn’s La Structure des révolutions scientifiques (1962), she overlapped references as varied as science, astrology, myth, cosmologies and chthonic imagination, with a liking for the figure of the labyrinth which, in her view, most powerfully incarnates “mythic and poetic thinking” (Lévi-Strauss). Involved for many years with “archaeological and mythical” concerns, through a use of “archaic” materials like wood and earth, the artist then proceeded to undertake new explorations questioning the future development of humanity.