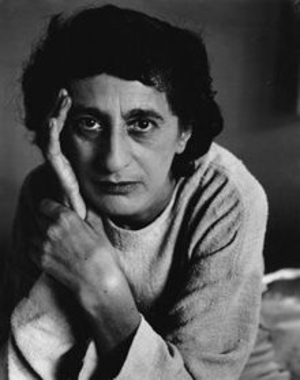 The first textile artist to have a solo exhibition at the Museum of Modern Art in New York in 1949 and specialist in the techniques and history of weaving in South America, Anni Albers is also the author of two theoretical books on the practice of design (On Designing, 1959) and weaving (On Weaving, 1965). Brought up in an affluent, intellectual family, she attended private art classes in her youth and was taught by the Post-Impressionist painter Martin Brandenburg. After an initial period at the Kunstgewerbeschule (School of Applied Arts) in Hamburg, in 1922, she chose a more innovative path by enrolling at the Bauhaus in Weimar. Taught by Georg Muche and then Johannes Itten, she joined the weaving workshop, towards which all women were systematically directed. In 1925, the Bauhaus moved to Dessau; in that same year, three years after their first meeting, she married artist Josef Albers and created tapestries with geometric patterns for Gropius’s house, while also designing theatre curtains. The weaving workshop intended to be utilitarian and carried out many scientific tests; the artist, along with other students, developed fabric for tubular steel furniture as well as for wall hangings. They trialled new materials such as cellophane and artificial silk. Albers created a fabric for the event hall at the Federal School that could stretch and absorb noise in order to improve acoustics. She received her diploma at the Bauhaus in 1930. In 1933, with the growing violence of Nazi anti-Semitism, it became clear that she had to leave Germany. Architect Philip Johnson, whom they had met earlier at the Bauhaus, invited the couple to teach at Black Mountain College in North Carolina. In 1934, Albers set up a weaving workshop at Black Mountain College, where she was an assistant professor until 1949. She then became a textile art specialist for a number of art schools. At the same time, she worked on fabric prototypes for large companies such as Rosenthal and Knoll, all the while continuing her own experimental and artistic work. Several trips to Mexico introduced her to traditional South American weaving, which she studied and which was to greatly inspire her work. In 1965, the Jewish Museum of New York asked her for an artwork commemorating the victims of the Holocaust. This piece, Six Prayers, was to be her last textile work, as she then devoted herself to lithography and printmaking. In 1975, her work was exhibited at the Kunstmuseum in Dusseldorf and at the Bauhaus-Archiv in Berlin.