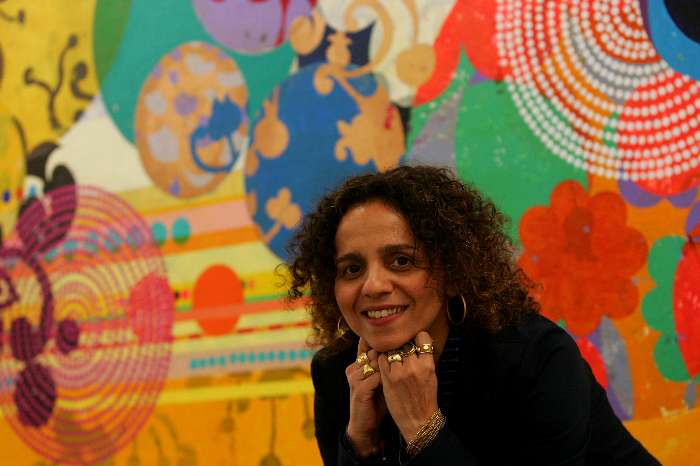 Milhazes spent two years studying at the Parque Lage School of Visual Arts in Rio de Janeiro, a city that fed her art in fundamental and multiple ways. Engaging in a variation of the concept of cannibalism (anthropophagy) that was so important to the Brazilian modernist movement of the 1920s, she considers her work to be the result of the “digestion” of a constellation of elements, such as Matisse’s arabesques, Mondrian’s structure, Brazilian baroque architecture, and her country’s rich musical and visual folklore. If at first glance her painting seems primarily decorative due to its graphic and chromatic exuberance, it is above all order and structure the artist is interested in, insisting on the geometrical character of her compositions, which are nonetheless brimming with hypnotic floral and arabesque patterns. She is a painter, yet she remains a foreigner to the age-old act of facing the canvas, brush in hand: every pattern, every colour that appears on her large paintings is the result of the transfer of what had been previously painted on sheets of tracing paper. The mark of the hand is cancelled; the physical trace non-existent. If it wasn’t for the occasional small transfer accident, which betrays her purely manual process, it would seem like computer generated graphic design. Despite the numerous layers, the pictorial matter shows no thickness. The labyrinthine claustrophobia we feel - following an initial sense of cheerfulness - comes from the accumulation of ideas, or rather of dematerialized colours and shapes. The painter, whose works could be mistaken for prints that were mass-produced solely for their visual appeal, is in reality a strict artist who courageously stands by her anachronistic and risky choices. She chooses to engage in an excessive kind of painting, requiring a physically demanding process, in a contemporary context where the conceptual, where minimalist language, and a reliance on new media dominates. She also demonstrates a preference for the “pretty” over the “beautiful”. In 2002, New York’s Museum of Modern Art (MoMA) published Coisa linda ("pretty thing"), a book in which she inserted plates of her images between Brazilian pop song lyrics. Her works appear in several American collections, including the Guggenheim Museum in New York. She has also been featured in solo exhibitions, namely at the Fondation Cartier in 2009.