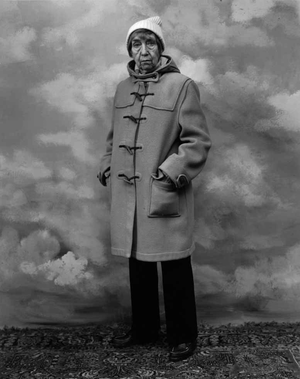 Following a brief period of study at Ohio State University, Berenice (or Bernice) Abbott went to New York where she joined the art scene in Greenwich Village. She left for Paris in 1921 to study sculpture and later train with the photographer Man Ray before opening her own studio in the city in 1926. Using tight framing and stripping away all unnecessary elements, she photographed the artistic and intellectual circles of Paris and had her work included in several modernist exhibitions in Paris, New York and Stuttgart. She returned to New York in 1929 where she opened a new studio. During the same period, she circulated urban documentary images created by Eugène Atget, a large part of whose work she had bought after his death, among gallery-owners and publishers. She began to document the urban transformations taking place in New York City using similar methods to Atget’s. She was commissioned to produce a series of photographs on the city’s Victorian-era buildings, which was subsequently published in a guide and exhibited at the Museum of the City of New York. In 1935 Abbott received assistance from the Federal Art Project, a fund to support the visual arts operating within the framework of the Works Progress Administration, a wide-ranging federal programme initiated by the Roosevelt administration as a continuation of the New Deal. Abbott’s project remained unchanged, to capture the perpetual transformations that the city was experiencing. Uniting old-style buildings with modern businesses, her photographs combine towers and gigantic skyscrapers with the less imposing buildings of the past. Shop windows and stacks of goods are mixed with entire buildings or details of architectural designs, bridges and boats. With this series (Changing New York), Abbott entered the ranks of the documentary photographers of the 1930s: originally envisaged as an artistic work to be distinct from the purely documentary photographs of the period, with time Changing New York developed into an archive of images. Taking and preparing the photographs alone, she built up a team of researchers charged with collecting background information linked to the images, compiling the maps, describing the buildings, explaining the business operations of the companies photographed, and collecting press cuttings and interviews. With the purpose of conserving her images for historical purposes, she created proofs with a photographic chamber to show details to best advantage and favoured wide-angle shots while wishing to show the most striking architectural contrasts. Changing New York was launched the same year as the photographic campaign of the Farm Security Administration (FSA), the successor to the Resettlement Administration, for which Dorothea Lange* in particular worked. The two projects – one urban, the other rural – are considered complementary, a fact that curbed Abbott’s ambition, who was interested in extending her project to cover the whole of the United States. The two projects were presented together in 1938 at the first international photographic exhibition in the Grand Central Palace, New York. Conceived and hailed as a personal artistic project, Abbott’s contribution to Changing New York continued until 1939. The result is a series of 302 images supported by information gathered by her researchers. A section of their work was exhibited at the Museum of the City of New York in 1937 before being collected in a book two years later and presented in the form of a guide to New York for visitors to the World’s Fair held in the city in 1939-40. Subsequently, B. Abbott worked for the Physical Science Study Committee at the Massachusetts Institute of Technology to illustrate the principles of mechanics and light. In 1960 the Smithsonian Institute in Washington, D.C., held a travelling exhibition of her photographs titled Image of Physics; several books were published that included her scientific works: Magnet (1964), Motion (1965) and The Attractive Universe: Gravity and the Shape of Space (1969). Abstract photographs she made as part of her work show striking formal qualities and reveal visual surprises and discoveries. In addition to her photographic work, Abbott taught at the New York School for Social Research (1934-58) and published two manuals, A Guide to Better Photography (1941) and The View Camera Made Simple (1948). During the 1950s she developed several photographic patents, inventions and procedures, all with the aim of establishing a universal method for teaching photography.