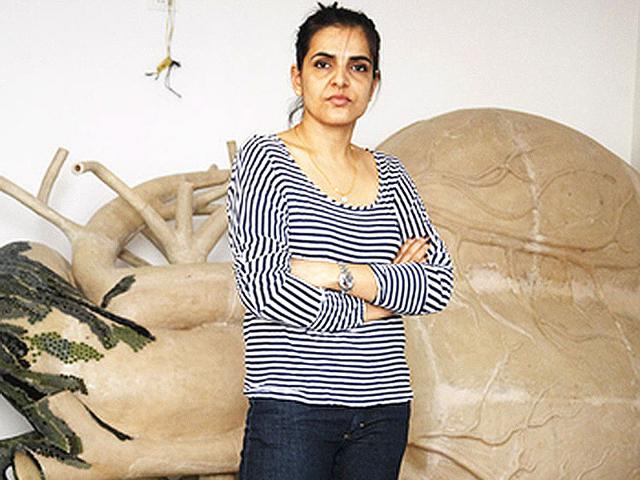 After graduating from Newcastle Polytechnic in 1991, Bharti Kher travelled to India where she met her future husband Subodh Gupta, an internationally renowned artist. She moved to New Delhi in 1993. Between tradition and modernity, between ecology and technology, her art focuses on issues of identity and culture. She is mostly known for her use of bindis, which became her signature motif when she discovering sperm-shaped bindis in 1995. A traditional cultural symbol for Indian women, equally religious, social, and conjugal, it represents the third eye, a bridge between the spiritual and physical worlds. However, its use is increasingly aesthetic. B. Kher integrates them into her “paintings”, abstract and colourful compositions on panels, and uses them profusely in her fibre glass sculptures, which sometimes represent hybrid beings, part human part animal, magical creatures, such as, for example, a vacuum cleaner with the head of an animal, Hungry Dogs Eat Dirty Pudding (2004). Through these characters, she creates a mythology occasionally inspired by existing legends. In An Absence of Assignable Cause (2007), she created a life-size whale heart out of fibre glass, which she covered with thousands of bindis; the heart lies on the ground, looking like a monster straight out of a fairy tale. Her work is often an allegory for violence and death. As an engaged artist, B. Kher also creates works such as The Girl With the Hairy Lip Said No (2004), which on the one hand evokes arranged marriage rituals and the status of women in India, and on the other, the English tea tradition. Invited to participate in the Paris-Delhi-Bombay exhibition at the Centre Georges-Pompidou in 2011, she elected to show Reveal the Secrets That You Seek, a work about self-awareness and the passage of time. She belongs to a new generation of Indian artists, in the wake of Anish Kapoor, who have gained international recognition.