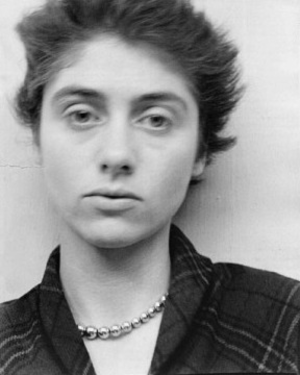 Diane Arbus was born into an affluent family of the New York upper crust. She took her first photographs in the early 1940s and was married photographer Allan Arbus at the age of 18, with whom she worked as a fashion photographer for magazines like Glamour and Vogue. After the Second World War, she separated from her husband and moved out with her two daughters, while continuing to collaborate as an independent photographer with Harper’s Bazaar, Show, Glamour, Esquire, and The New York Times. She studied under Berenice Abbott* and Alexey Brodovitch, Harper’s Bazaar's art director, from 1955 to 1957, at the New School in New York, as well as under Marvin Israel and Richard Avedon. Around 1956, she met Lisette Model* with whom she would train for two years, a defining moment for Arbus. They both favoured medium format, and each ascribed great importance to their subjects, often social misfits. Model encouraged Arbus to focus on photographing people. Her first works were accomplished using a 35mm camera. During the 1960s, however, she switched to a Rolleiflex twin-lens reflex camera, with its recognisable square format and greater detailed images (Identical Twins, 1967). She used a flash even during the daytime, to isolate the subject in the foreground from the background. Fascinated by non-standard characters and circus freaks, Arbus sought to capture the uniqueness of every one of her models. The treatment, characterised by empathy and critical distance is constant throughout (Jewish Giant, taken at Home with His Parents in the Bronx, 1970). In the 1950s and 1960s, from the crowds in Coney Island to strollers in Central Park, her photographs constitute a certain vision of American life. She became one of the most noteworthy practitioners of street photography, but showed herself to be more interested in individual characters. Her snapshots form a contemporary anthropology: American middle-class, portraits of couples, children, carnival performers, nudists, and even transvestites (A Young Man in Curlers at Home on West 20th Street, 1966). She explored new subjects observed in an never-before-seen level of intimacy. By shooting from a certain angle, such as the raw and contemplative frontal portrait (Boy With a Straw Hat Waiting to March in a Pro-War Parade, 1967) or calling attention to accessories, she highlights the strangeness of these individuals considered to be "normal" and, simultaneously, strives towards the universal in her singular snapshots. All of these models seem like allegories of post-war America. In 1959, she would start keeping journals, and would continue to do so until her death. During this period, she initiated a series snapshots taken in circuses, which paved the way for an entire generation of photographers. The tattooed man, the sword-swallowing woman, are all approached head-on with a certain respect. The Child with Toy Hand Grenade in Central Park (1962) is perhaps one of her most iconic photographs. A sneer takes over the face of the child holding a toy in his hand. The contrast between the innocence usually associated with children and his maniacal expression enhance the strange quality of the image, which otherwise displays a rather simple and effective composition and style. Arbus received a Guggenheim grant on two occasions, in 1963 and 1966, for her "American Rites, Manners, and Customs" project, which documented the role of beliefs and rituals in daily life: the Thanksgiving parade, the San Gennaro festival, Halloween. Around the same time, she acquired a certain professional independence, and started a few series of portraits. She was exhibited at the MoMA for the first time in 1964, and again in 1967 for the "New Documents" exhibition, which sought to reconsider the status of photography. The same year, she became the first American photographer exhibited at the Venice Biennale. Masked Woman in a Wheelchair, 1970, is emblematic of her final works, carried out in institutions for the mentally disabled between 1969 to 1971. In 1970, she produced a portfolio of original prints called Box of Ten Photographs. Arbus committed suicide at the age of 48 in 1971. Published by Aperture, she would be discovered by a broad public on which she would have a decisive and definitive impact.