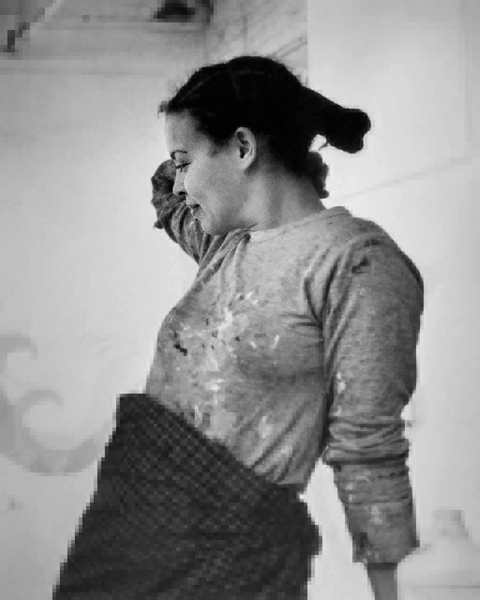 Questions of racial identity, social class, and gender are at the heart of Ellen Gallagher’s work, which includes painting, drawing, collage, and, most recently, video. Born to an Irish-American mother, who raised her, and an African-American father, the artist was confronted at a young age by the idea of belonging and by the reality of latent racism. She studied at the School of the Museum of Fine Arts in Boston (1992), then at the Skowhegan School of Painting and Sculpture in Maine (1993). Her work approaches racial identity, starting in the 1990’s, through a lens of cultural history. She is particularly interested in blackface minstrelsy, an American musical theater tradition that began in the 19th century, and consisted of white performers artificially blackening their faces with makeup. In Pomp-Bang (2003), she collected images drawn from magazines marketed to African-American women (lauding the merits of skin-lightening creams or hair-relaxing products) imposing a certain ideal of beauty, and covered them in abstractly-shaped yellow plasticine wigs, transforming them from figures of “beauty” to monstrous beings. Similar to the minimalist work of Agnes Martin* (1912-2914), her paintings at first seem abstract, but upon further observation, the viewer begins to see a mishmash of eyes or fleshy lips, drawn from caricaturistic representations of black musicians in American cartoons. Gallagher has recently become interested in other themes, always politicized, like the “middle passage,” the route taken by captured Africans en route to slavery in the United States, and Drexciya, a mythical underwater kingdom populated by the descendants of pregnant slaves thrown overboard during the journey. In 2001 this subject inspired a series of aquarelle drawings called Watery Ecstatic. An exhibitor at the Whitney Biennial since 1995, Gallagher’s work is included in many international collections.