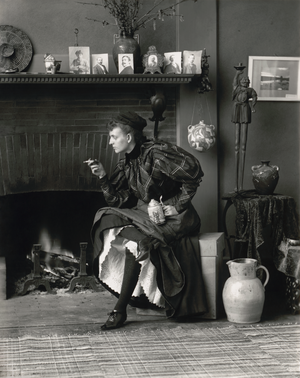 After her studies, in 1883, at the Julian Academy in Paris and at the Art Students League in Washington, Frances Benjamin Johnston learnt photographic techniques with Thomas William Smillie, at the Smithsonian Institution, equipped with a Kodak camera offered her by George Eastman. In the 1890s, she produced major series of portraits of senior dignitaries in the American government, including The White House (1893). In 1899, she was chosen as a member of the jury of the prestigious Philadelphia Photographic Society and, five years later, she joined the Photo-Secession group headed by Alfred Stieglitz. She was a prolific author, publishing many articles about women’s photographic activities in popular magazines, among them Demorest’s Family Magazine and Cosmopolitan. In 1900, she was selected to be one of the two women delegates at the International Congress of Photography, which was held in tandem with the Paris World Fair, where, among other pieces, she exhibited her famous platinum prints of the Hampton Institute, an establishment devoted to the education of African Americans, founded in 1868. In 1966, the critic Lincoln Kirsten published forty prints from that work (The Hampton Album), and an exhibition was organized that same year at the Museum of Modern Art (MoMA) in New York. In 1910, by which time she was regarded as one of the most influential documentary photographers, she started specializing in garden photography, and became one of the first to experiment with colour. Up until 1917 she ran a studio in New York with Mattie Edwards Hewitt, where she worked essentially for architects and businessmen. In the 1930s, a grant from the Carnegie Foundation enabled her to document the colonial architecture of the southern United States. In 1945, she became an honorary member of the American Institute of Architects. Two years later, she donated her prints, negatives and letters to the Library of Congress (Washington).