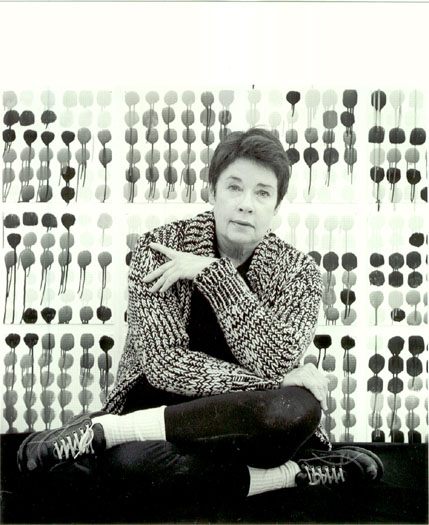 Jennifer Bartlett studied at Mills College in Oakland, where she met Elizabeth Murray (1940-2007) and her first husband, Ed Bartlett; then she graduated from Yale University in 1965. She quickly abandoned her teaching job to devote herself to painting, and settled in New York. While looking for a personal path, at a time when Earth Art, Body Art and Conceptual Art were all the rage, she wrote Cleopatra, published in 1971, and prepared an autobiographical book, House of the Universe, which would appear in 1985. In 1968, while working on monumental formats, the painter was also looking for a surface calling for no preliminary preparation, unlike canvas. As basic modules she started using small steel plates: sometimes white enameled plates conjuring up the New York subway, at others plates imprinted with lines, like graph paper. She then covered them with Testor model paint, and tried out various combinations. In the summer of 1975, in Southampton, on Long Island, she thus produced Rhapsody (1975-76), a work which was successfully exhibited the following year at the Paula Cooper gallery in New York. That work was composed of 988 plates which were as many abstract and figurative variations on the motif of the house she was living in. In the late 1970s, her series of Swimmers brought together the same motif, side by side: one painted on an enameled plate, the other painted with oil on canvas. In the 1980s, she made use of that association of surfaces with an identical subject executed from different angles and in different styles, to which she sometimes added three-dimensional replicas of the elements depicted, giving the impression that they were leaving the picture (Sunset and Concrete Dock, 1984). J. Bartlett is still involved with her by turns abstract, figurative and pointillist work on one and the same subject, finally mixing the whole thing up, as in her series Amagansett (2007).