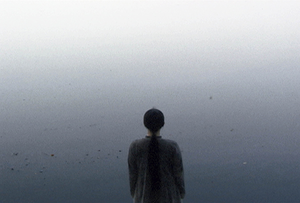 After studying art in Seoul, Kimsooja took part in a lithography workshop at the École nationale supérieure des Beaux-Arts in Paris, followed by a residency at New York's Museum of Modern Art PS 1. Her early work makes use of fabric, which would quickly become her favorite medium, given how it is emblematic of weaving, and therefore representative of a traditionally feminine art. First stitched together like pieces of a puzzle, the large colorful embroidered covers she displays come from traditional Korean practices - wedding bedspreads, package wrapping - these fabrics are either suspended from wires or placed on the ground like large carpets, or restaurant tablecloths. In 1997 Kimsooja embarked on a journey of 2,727 kilometers through South Korea, perched on a truck full of bottaris, bundles enveloped by brightly colored fabric. In a video entitled Bottari Truck, she is filmed from the back, with the scenery slowly passing slowly before her. This piece, composed of a truck and a film projection, was presented at an exhibition entitled Cities on the Move : art and architecture in Asia, in 1998 at CAPC, musée de Bordeaux. It was then projected at Mac/Val, the Museum of Contemporary Art of Vitry (2007), serving as a symbol of travel and the wandering nature of the globalized contemporary art. After a journey ending at the St. Bernard church, a site of protests about the struggles of undocumented immigrants, the piece was finally shown at the International Contemporary Art Fair in Paris, in front of the entrance to the Louvre's Cour Carrée in 2008. The metaphor of weaving is embodied in a series of videos titled Needle Woman (1999-2000): her own body motionless, resting in the heart of busy crowds in the world’s biggest cities (Tokyo, Seoul, Mexico City) becomes the needle that weaves the continuous flow of human bodies; or lying on a rock between heaven and earth, it unites the two worlds. During a trip to India, Kimsooja filmed the dyers and launderers of Mumbai. Mumbai: A Laundry (2008) consists of four screens showing the hard labor and living conditions in India but also the beauty of this practice and the colors of the country. Continuing her investigation of world traditions, she undertook a series of films about the various practices of weaving in Peru and Africa, to show the permanence of the ritual, despite cultural differences. Alongside these anthropological pieces with their large, formal aesthetic, she has created more abstract and sensory works, like her screens of changing colors, presented at La Fenice theater in Venice in 2005, then at the théâtre du Châtelet during the 2009 Nuit Blanche in Paris, or the palace of mirrors that she installed in Madrid, in the Buen Retiro park in 2006.