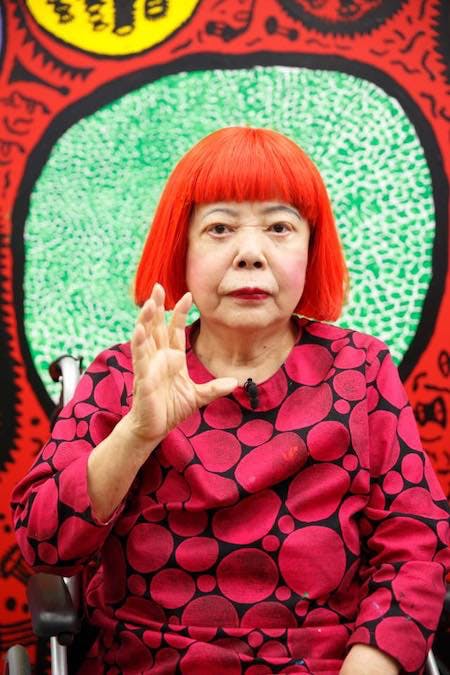 Kusama Yayoi was born into a prosperous and conservative family in the midst of a war-torn country. At the age of 10, she suffered from hallucinations. She used drawing as a means to fight her fear of disintegration at the hands of an invisible world threatening to spread and swallow her up. From the very beginning, her mental illness took centre stage in her creative process. She then studied at the Tokyo School of Fine Arts where she was introduced to Nihonga painting. In the 1950s, she explored more abstract forms, equally popular with artistic and psychiatric circles. The subjects of her childhood drawings (flowers, the cosmos, and the heart) are repeated in an infinite and uniform pattern. Twelve years later, she moved to New York and studied at the Arts Students League. She then created her Infinity Net series, successively larger compositions that were exhibited for the first time at the Brata Gallery in 1959. They seemed to submerge the public in a network of dots and lines. According to critic Lucy Lippard*, this work placed her in the Eccentric Abstraction movement, which is defined by a rejection of strict minimalism, and the inclusion of emotion, sensuality, and the use of synthetic materials endowed with organic shapes and a certain sexual resonance. In 1963, the artist unveiled her first installation in New York in the Gertrude Stein* gallery, Aggregation: One Thousand Boats Show, a boat covered in white phallic shapes in a room where the walls were clad in wallpaper sporting the same pattern. Her series of obsessional objects are tied to sexuality, food, and furniture. In 1963, she organized her first libertarian happenings and fashion shows. She returned to Japan in 1973, where after 1980, she started producing flexible sculptures and environments that play with mirror effects and artificial lighting: closed and sensual spaces, always saturated with her emblematic dots. In the 1990s, several exhibitions secured her international recognition, enabling her to create monumental installations comprising inflatable objects and outdoor sculptures.