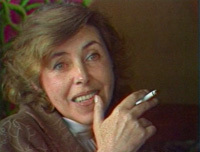 Laurence Bataille was the daughter of author Georges Bataille and Romanian actress Sylvia Bataille, who played in Renoir’s famous film “A Day in the Country” (and who separated from her husband in 1935 before marrying Jacques Lacan). When she was 16, she posed for painter Balthus and decided to become an actress. During a tour in Algeria, she temporarily became a member of the Communist Party. Shortly afterwards, she began her medical studies during which she became strongly involved in the Algerian independence, which resulted in

spending six weeks in prison in 1960. She was a member of the Freudian School of Paris and, after its dissolution, joined the École de la cause freudienne, which she left after the death of J. Lacan. From 1976 to 1978, she was the director of the Ornicar? magazine in which she published several articles and numerous reviews. A year after the death of the one whom J. Lacan described as his faithful Antigone, a collection of her writings was published: “L’Ombilic du rêve, d’une pratique de la psychanalyse” [The Umbilicus of the Dream, on The Practice of Psychoanalysis], which describes the interpretation of a dream which was central to her own analysis. L. Bataille, a woman of commitment, has always followed through on her convictions. She was a courageous activist, a closely listened to practitioner and a woman of heart deeply admired by all those who knew her.