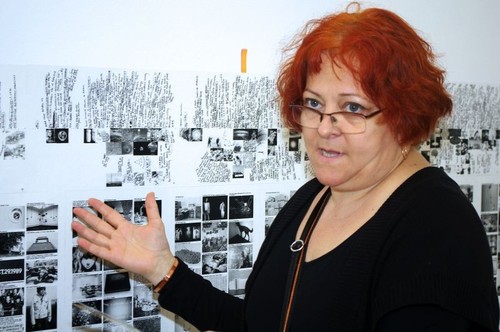 In the 1980s, under the most brutal Communist regime in Eastern Europe, Lia Perjovschi began creating performances in her apartment, in which her body was the main element. After the revolution in 1989, in her studio and in collaboration with her husband, Dan Perjovschi, she set up what was to be the basis of the Contemporary Art Archive (CAA): a space for documentation and consultation, where regular debates on their collection of books, publications, post cards, and slides on international art from Western Europe and the United States, as well as from Romania, were held. Her objective was to gather together and organise this wealth of information in the most accessible way for artists and the public. The couple organised reading sessions and discussions in order to share knowledge, but also to share the radical ideas on art production and the history of art that had been concealed in this part of the world until the fall of the communist regime.This project inspired a series of drawings and texts that Perjovschi published in 2004, entitled My Subjective Art History, 1990–2004. By the end of the 1990s, through its exhibitions and the publication of newsletters, the CAA had become an invaluable database for the art community in Romania; it was an alternative to the teaching of arts as well as an independent archive centre that functioned without financial support from the state. Perjovschi describes herself as an “art detective”, whose practice of art combines reading and drawing, and also “copy and pasting”, mixing concepts, texts, and images. She is currently working on the project for an imaginary museum, “Plans for a Knowledge Museum”, based on the files collected during the active years of the CAA. She sees it as an interdisciplinary approach; a museum, managed by an artist, where accessing archives and methods of learning and education is a natural process.