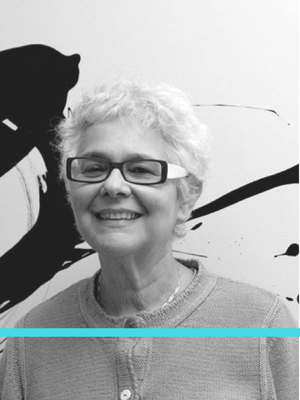 After studying art at the Escuela Nacional de Bellas Artes in Buenos Aires and then at the Universidad Iberoamericana in Mexico, Liliana Porter moved to New York in 1964. In 1965, she founded the New York Graphic Workshop with Uruguayan Luis and Venezuelan José Guillermo Castillo, which promoted a more conceptual use of printing techniques. Their collaboration ended in 1970, after six years of work. Since the 1960s, some of the artist’s works have referred to works by Belgian surrealist René Magritte.  In Magritte’s 16th of September I (1975), the artist appropriated the iconography of the man in the bowler hat – a recurrent figure in the painter’s work – but the male figure was replaced by a female figure, hatless, with short, tousled hair. While the artist draws on traditional techniques for their imitative possibilities, these also belong to broader explorations with a clearly playful aspect to them. Since the 1990s, she has thus often made use of figurines that she combines with drawings or paintings to create minimalist stagings. The installations from the Forced Labor series show small characters confronted with enormous tasks, such as this “little chap” that seems to have demolished the wall of the gallery with his hammer (Man With Hammer, 2006). Faced with the immensity of their apparent desires and difficulties, despite their obvious artificiality, these small beings often inspire empathy. The spontaneous emotional reaction can therefore introduce an intellectual consideration of the nature of perception itself. The sculptor’s works thus have a degree of complexity and critical potential, which await an active spectator to reveal what lurks beneath their amusing surface. For instance, for the project Internet Rehearsal (2008), commissioned by the Dia Art Foundation in Beacon, she created a choir of little chick toys to sing the song La donna é mobile one after the other. Deceptively simple, the artwork actually contains a different reality of layers of interpretation, since this song about the inconstancy of women comes from the tragic end of Rigoletto by Giuseppe Verdi, a drama in which men represent the truly active forces behind murder and infidelity. A renowned artist, L. Porter won the prestigious Guggenheim Fellowship in 1980.