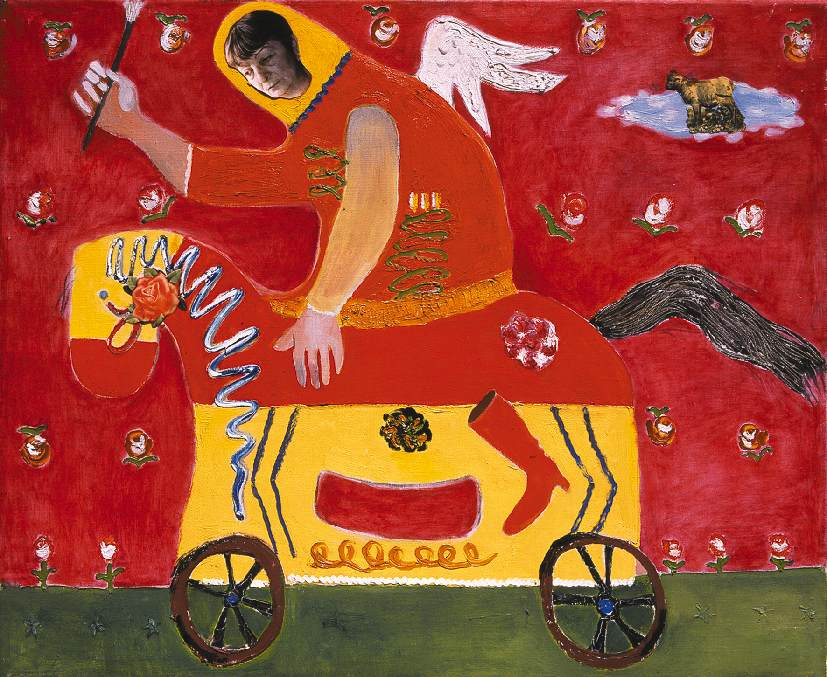 Born into a provincial Jewish family, Margit Anna arrived in Budapest in about 1930, where she learnt drawing at a private school. Her early works were underpinned by the very strong spiritual relationship she had with her husband, the painter Imre Ámos, whom she also regarded as her art teacher (she was, incidentally, often accused of being his epigone). Their encounter with Chagall in Paris, in 1937, influenced their work. Ámos died in a concentration camp. M. Anna saw herself as someone on the sidelines because of her poverty and origins, and the forms of discrimination she suffered - in addition to the fact that she was a woman, which made her career even harder - made her differentness one of the themes of her art. As she looked for her place in the world as a woman and an artist, she produced just self-portraits in which she was, turn by turn, a circus performer, a dancer, painter and model, and prostitute. In her pictures, everything, including family and human tragedies like the Holocaust, was expressed using grotesque puppets made solely of heads, hands, and torsos: in an elementary form, restricted to a single sphere, they were prophet, redeemer, widow, and Fate. It was under the influence of Lajos Vajda and Dezsö Korniss, the Szentendre artists’ colony, and the Cobra group that she developed that conspicuously powerful approach, evoking folklore and old-fashioned culture. She was a co-founder of the Hungarian European School in 1945. In the 1950s however, under the Stalinist Hungarian government, she was not permitted to exhibit and lived off occasional commissions; her first major show did not take place until 1968. In the 1970s, her biblical subjects were enhanced by motifs of popular imagery and paintings on glass. By subversively assuming the malignant qualities which popular beliefs attribute to women, she also depicted witches. In her last pictures, she showed her own body deformed by old age, and the successive stages leading to death.