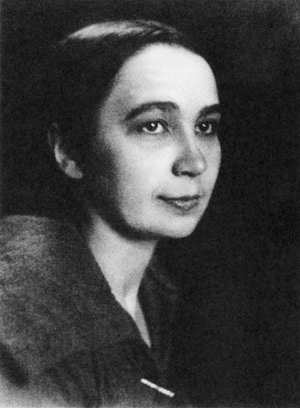 Born into a family of minor Russian nobility, Natalia Gontcharova was admitted in 1898 to the School of Painting, Sculpture and Architecture in Moscow, where she trained with the sculptor Paul Troubetzkoï, a disciple of Auguste Rodin. She met her husband, the painter Mikhail Larionov, and then became a student of impressionist Konstantin Korovin. Her early work reflects her integration of Impressionism, Fauvism and the Nabis into her work. Meanwhile, she cultivated her interest in Russian folk art, notably icons and loubki. In Moscow in 1910, along with Mr. Larionov, she participated in founding the Jack of Diamonds group that claimed the influences of Paul Cézanne, the Fauves and post-Impressionism, and organized exhibitions of painters of the Russian or French avant-garde. But she criticized the Jack of Diamonds group for its subservience to French painting, and advocated for an inspiration more oriented toward Russian folk art. For this reason, in 1912, she and her husband created The Donkey Tail group—inspired by Russian and Oriental neo-primitivism—and put on a scandalous exhibition in Moscow. In 1913, inspired by Cubism and Italian Futurism, M. Larionov published the founding manifesto of the "Rayonist" (loutchizm) movement, which aims to make visible the vibrations of an object, its material "radiation", which on the canvas takes the shape of colored rays. In 1913-1914, the couple showed "rayonnist" works in Paris as part of a large exhibition organized by the Paul Guillaume gallery. Serge Diaghilev proposed that the couple create sets, costumes, posters and programs for the famous Ballets Russes. After the disappearance of the director of the Russian troupe, Gontcharova continued painting, and increased her exhibitions: in 1920 at the International Contemporary Art Exhibition in Geneva, in 1922 at the Kingore Gallery in New York, while also contributing regularly to the Salon des Tuileries and the Paris Salon des Indépendents. Throughout the 1930s, the couple’s work was gradually forgotten. They received renewed attention only thanks to a retrospective of Sergei Diaghilev. In 1961, a large exhibition held in London dedicated to Gontcharova and Larionov’s oeuvre gave the artist her proper place in the historiography of Russian avant-garde.