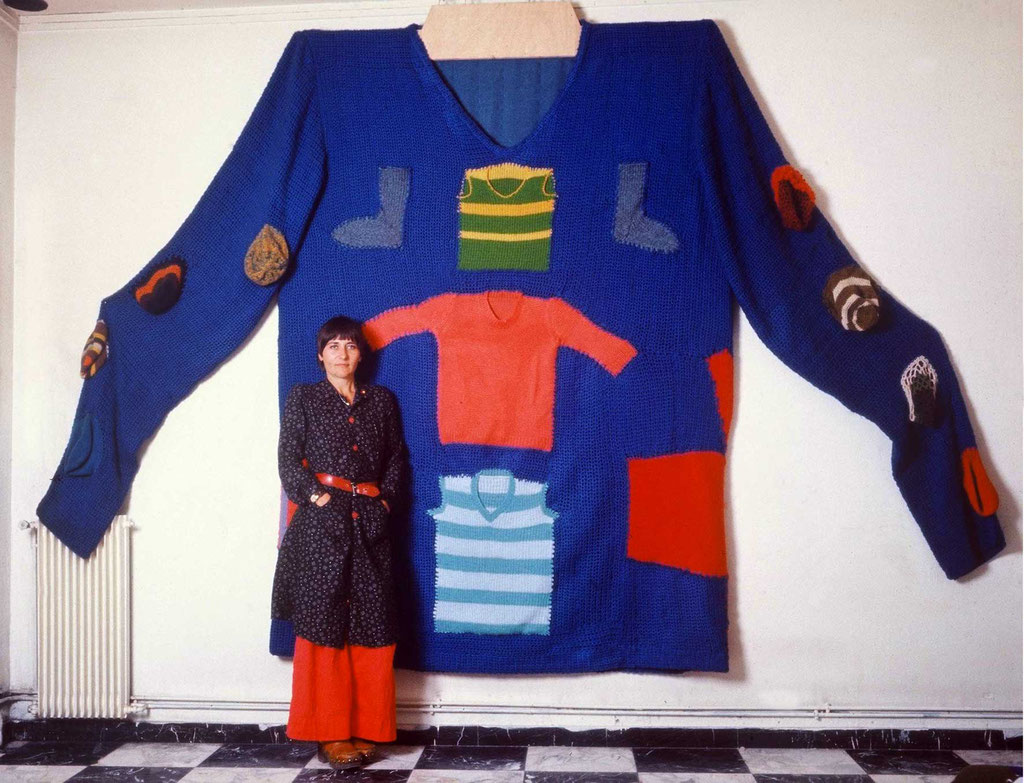 Active within the feminist movement from its earliest days, Raymonde Arcier, an office worker and self-taught artist, resumed her sociological studies at Vincennes University and, from 1970 on, produced her most striking works, crocheting wool and cotton, and knitting metal - with each piece demanding up to a year’s work. Through her appropriation of this female cultural apprenticeship, she wittily conjured up her social confinement, trying - to use her own words - to “make everyone aware of the huge labour of women”; as for housewives’ bags, she tried to “illustrate the time, energy, money, fatigue and pleasure involved in filling them, and emptying them; emptying them, and filling them”. Among her monumental sculptures we find Faire ses provisions (1971), huge shopping bags, awkward to carry, made of nylon string knitted with garter stitching, Héritage (Les Tricots de ma mère, 1972-1973), a huge unwearable sweater made with crocheted wool lined with hessian, Paille de fer pour ca(sse)role, 1974-1975, and a scouring sponge, one meter 40 inches in diameter, weighing seven kilos 16lbs . In order to free herself from them, to gain recognition for them, and share them, she treats household chores in the mode of the gigantic, the off-beat, and the excessive, on a par with the oppression suffered, as in Au nom du père (1975-1976), which made the front page of La Revue d’en face, in March 1979: a very large woman filled the exhibition space, standing stoutly on both legs, with her arms outstretched cross-like, crucified on household and sexual tasks. In the same vein, she produced Mère et petite mère (1970) and Jeu de dame (1971), a tapestry consisting of the square arrangement of eight dirty floor cloths and eight clean floor cloths, turned into an abstract artwork, resulting from that much decried daily round. While carrying on her professional activities, R. Arcier then became involved in writing and diverse visual works, in particular paintings and collages.