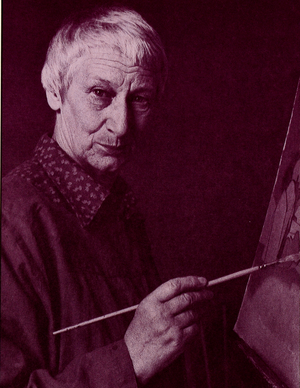 The eldest daughter of a carpenter turned construction manager, Henrietta Catherine Angus aspired to dedicate her life to painting from a young age. Her parents supported her aspirations and hired the former director of the Canterbury College School of Art as her tutor. The young girl then studied painting at this school in Christchurch, the cultural capital of New Zealand at the time, under Leonard Booth (1879-1974) and Cecil Kelly (1878-1954). She also followed courses at the Elam School of Fine Art in Auckland in 1930 and discovered the art of the Italian Renaissance and of other masters such as the Dutch painter Vermeer whose work deeply influenced her. At the age of 22, she got married on the spur of a moment and divorced four years later. An illustrator for the local Christchurch newspaper Press Junior from 1934 to 1937, she also developed her own work in her studio in Cambridge Terrace. Left unable to have children after a miscarriage, she was committed to a psychiatric hospital for a few months. After this she lived alone, devoting herself exclusively to her art in the North and South islands. She left New Zealand only once, between 1958 and 1959, for a trip to Europe organised by the New Zealand Art Societies.

Translated from the French by Katia Porro