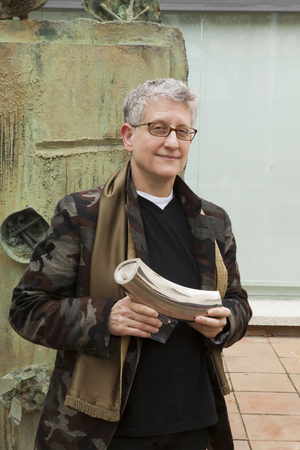 This singular artist first became known in the 1990s for aluminium sticks engraved with phrases, and then for the blocks of blue or translucent glass she placed on the ground, or even for what she calls the Asphere (1988-2001), a kind of steel ball that isn't fully spherical. While they conform to formalist and minimalist principles, these works already demonstrate her penchant for poetic and symbolic content. In parallel, Roni Horn made photographic series of pool locker rooms (Ellipsis, 1998), portraits of women, owls (Dead Owl, 1997), and clowns. Another part of her work is devoted to large drawings, consisting of blue or red symbols, fragments of exploded lines, notched in white paper. This body of work, unclassifiable due to the hybridization of mediums she uses, the figuration-abstraction, text-image duality, speaks volumes about her position as an artist who seeks to express the emotions she feels towards nature, landscapes, and time. Since 1975, she has travelled regularly to Iceland, living in a rudimentary cabin inhabited by wild duck feather pickers, and taking photographs of her hosts, volcanoes and the sea. This wild and mysterious island, part volcano and part glacier, with its hot springs, had a certain decisive influence on her artistic practice, and gave rise to a series of books in nine volumes, entitled Island: To Place (1990-2006). Water is an essential part of her practice as well; we find it in her series of photographs of The River Thames (1999), but also in the glass blocks which seem to contain this liquid element. Horn is also known for a series of portraits of a friend, You Are the Weather (1994-1995), which attempts to capture, through close-ups of her face, a range of feelings, moods, and the passage of time; she also made portraits of Isabelle Huppert* (Portrait of an Image with Isabelle Huppert, 2005), a title which is highly indicative of her relationship with the model. Her work is haunted by the idea of duality, the double, of identity and difference. She touches on the experience of the spectator who, in her mind, is an integral part of the image. Her work was featured in a retrospective at the Tate Modern in London in 2009, before being exhibited at the Fondation Lambert in Avignon.