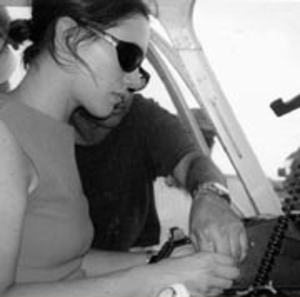 Sarah Morris, a young British-born artist with post pop leanings, oscillates between film and painting, between pictorial abstraction and analytical films. Her research is focused on typologies in urban architecture and sociological mechanisms in big American metropolises. While she graduated in, among other things, political and social sciences from the University of Cambridge in 1988, she is a self-taught artist. She then worked as an assistant for American artist Jeff Koons while attending the Whitney Museum of American Art Independent Study Program in 1990. Her first series of paintings are highly indebted to Warhol’s legacy. Her fascination with media language is reproduced in her work: Nothing, Insane, Liar and isolated numbers, taken from news items in the Times and the New York Post. Other signifiers draw her attention, such as luxury consumer products (high heels, sunglasses), which reappear in solitary environments inside her highly sensual glossy paintings. Morris who has already made eight films, but whose fame was acquired primarily through her paintings, gave up figuration in favour of abstraction in 1997, with her Midtown series and the eponymous film shot the following year in New York. Her painted grids, inspired by the façades of mirrored buildings and by Mondrian’s Boogie-Woogie period, dominate her pictorial work, while her films map out political and economic power structures, city by city, with a marked interest for conspiracy and strategy. After her film Los Angeles, made in 2004, she painted a related large fresco on location at the entrance to the Palais de Tokyo in Paris, entitled Endeavor. Using industrial paints to cover large swathes of colour, she creates a vast abstract panorama that jumps off the wall in an illusion of three-dimensionality, splayed out in interlaced geometric shapes. Many institutions have devoted solo exhibitions to her work. In 2010, she received the Joan-Mitchell* Foundation’s painting prize. She is married to artist Liam Gillick and also an experienced curator.