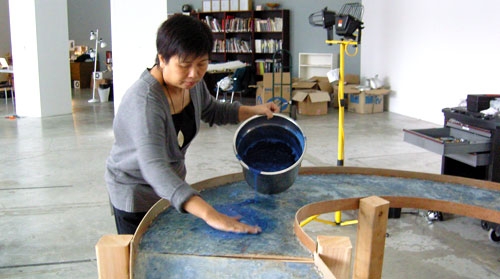 Shen Yuan graduated from the Academy of Fine Arts of Zhejiang in 1982. She belongs to the most radical generation of the 1980s avant-gardes and participated in the seminal exhibition China/Avant-Garde in Beijing in 1989. In the aftermath of the Tiananmen repression, she moved to Paris with her husband, the artist Huang Yong Ping. In France, she developed a very unusual artistic language informed by her experience as a non-western woman living in the West. Her first pieces made use of materials taken from the body and everyday life, such as her own nail clippings, hemp fibre, food, slippers, or furniture, which she turned into poetic, disconcerting, and often monumental pieces dealing with the issues of migration, memory, and the limits of language: her installation Perdre sa salive [“Losing One’s Saliva”, 1994-2000] offers a remarkable description of the violence and difficulties a foreign woman who cannot speak the new language faces. Her most striking pieces include Un Matin du monde [“One Morning of the World”, 2000], a traditional Chinese house roof rebuilt in Bern, Paris, and London; Bridge (2004), an impassable bridge made out of ceramic vases; and Trampolin (2004-2009), a series of mattresses embroidered with maps of Chinatowns around the world. S. Yuan explores the fate of the immigrant woman artist in times of global migration, while also calling attention to the obstacles imposed by cultural differences and which impede true understanding between humans. The repurposing of objects and the metaphorical meanings they refer to become the sociological and political evidence of a collective history. Her internationally acknowledged work has been the subject of several solo shows around the world and was featured at major art events, including the 52nd Venice Biennale in 2007.