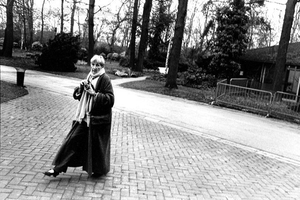 Sophie Bassouls is known for her photographs of writers and artists. After studying art history, she started work as a photographer and took charge of the photo department of L’Express, then in 1963 that of the Figaro littéraire. Married to Claude Bassouls, she had two children. With him, in 1976, she set up a freelance photojournalism agency called Rush, before joining the Sygma agency in 1986, where she was responsible for literary news. Today she works as a freelance photographer. More than 3,000 portraits bear witness to French and international intellectual and cultural life over the past few decades. Their great beauty stems from her original approach: situating the person in a very specific visual setting (décor, props, light), which helps to express the subject’s deep-seated personality. Her photos have been exhibited in particular in Nancy, Geneva, Bari, Naples, Bologna, New York and San Francisco, In Paris, in 2001, 666 portraits were shown in the Bibliothèque historique de la ville de Paris. Today, she creates collages where photographs are a major factor, but cut up, re-painted and put together in fragments surrounded by decorative motifs, with the use of gold leaf; at times, the result conjures up Gustav Klimt’s pictures. Her recent works have been exhibited at the La Réserve gallery in Paris (2005), the Des Femmes gallery in Paris (2008), in Naples, and in Istanbul and Ankara (2009).