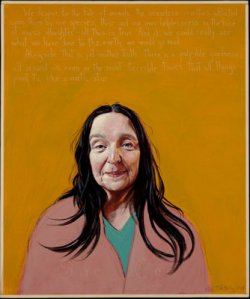 Born to a working-class family, Sue Coe graduated from the Chelsea School of Art and Royal College of Art in London. She moved to New York, where she taught until 1978, before fully devoting herself to painting and press illustration, exploring in each instance the theme of protest against any kind of social or political abuse of power. During her first years in New York, she gained knowledge of the Dada movement (founded in Zurich in 1916) and of New Objectivity (active in Germany between 1918 and 1933), the politically-conscious works of which tackled society’s failings with revolutionary fervour. Also an activist, she developed a sharp and unaffected figurative style, free of any element that would get in the way of the power of the message conveyed, and going so far as to add words or symbols to her drawings to simplify their interpretation. Coe’s first subjects dealt with all forms of inequality: urban violence is featured in a series of paintings that draw on her personal experience or on real events, such as Woman Walks into a Bar, Is Raped by Four Men on the Pool Table, While 20 Watch (1983), based on the rape of a 21-year-old woman. Racial discrimination is also depicted with straightforward realism in works that show acts of cruelty perpetrated by the Ku Klux Klan and during the Apartheid. Her drawings and paintings became increasingly expressionistic in the 1980s, as she denounced the United States’ international policies, such as the country’s invasion of the Caribbean in 1983 in U.S. Military Successfully Bombs a Mental Hospital in Grenada (1984). Animal cruelty also became a dominant theme around that time, with the Porkopolis series in 1988 and the book Dead Meat in 1995, in which she attacks the wrongdoings of the food-processing industry. Since then her works, which combine painting, drawing and collage in a style reminiscent of Otto Dix (1891-1969), have become much darker.