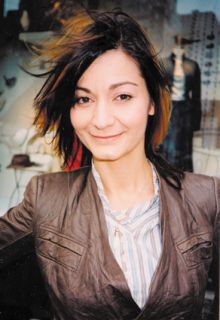 In the 1980s, following her return from New York, where she attended the Germain School of Photography, Sylvie Fleury opened an alternative exhibition space in Geneva that would become the nerve centre of the Swiss avant-garde. However, she is primarily known for her sculptures, installations, photographs, and performances, which, since 1990, have been showcasing objects related to the luxury goods industry and the exultant consumption that has defined the last two decades of the 20th century. Among her most famous works are the various incarnations of the Shopping Bags: the artist arranges the logo-bearing bags that she used to carry items purchased from top fashion brands directly on the floor of the exhibition space. She thus engages in what critics call "appropriation," a critical practice originating with Marcel Duchamp's Readymades (for example with Fontaine, Paris, 1917) before turning to Pop Art. As with her predecessors, her appropriations were ambiguous. Do her works aim to condemn, or, on the contrary, praise? In the case of her recent luxury cars repainted in nail polish colours (Skin Crime, 1997, which exist in several versions and whose subtitle, Givenchy 601, refers to a makeup brand), are we to infer an attack on male domination? Yet the artist refuses to adopt a feminist position and owns several sports cars herself. Also, when she exhibits sculptures in the form of giant tubes of lipstick or takes photographs of fashionable shoes, she especially calls attention to the level of desire and fetishism provoked by these objects. Her works, which display a deliberate seductive power, also attract because of their kitsch qualities, not devoid of humour (for example the First Spaceship on Venus series, 1996-1999, which look like giant phalluses ready to conquer space), as for their slick finish resembling that of design objects (Mushrooms, 2006). The artist therefore combines art, fashion, and design. She is less critical of consumption than having fun at the expense of the glamorous turn contemporary art has taken. She was featured in a retrospective at the Musée d’art moderne et contemporain (Mamco) in Geneva in 2008-2009.