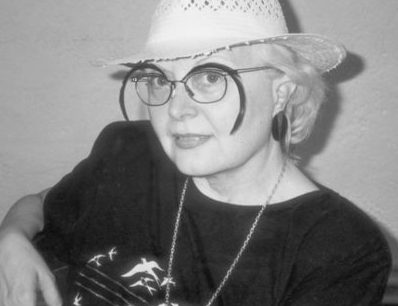 Tomaso Binga (who was married to the art critic Filiberto Menna) explained that she chose a male pseudonym in order to parody the cultural privileges reserved for men. This ploy to discredit the art world, passing by way of a disguised sexual identity (a theme which occurs throughout her work), started with a demystification of the difference between the sexes in writing and language. She lives in Rome, where, since 1970, she has carried on her tireless activity involving the organization of avant-garde events with performances, collages, video and sonic poetry works, and painting, involving nothing less than a contamination of codes—writing, gestures, bodies, signs, sounds and images—, very frequently pushed to the limits of meaninglessness, as, for example, in E non uscire di casa And don’t leave the house (1977), Abecedario (1981), Indovina cos’è Guess what it is (1987), Rimerotiche Erotic rhymes (1992) and Vorrei essere un vigile urbano I’d like to be a traffic policeman . Like nothing less than a midwife of images, Binga displays a provocative spirit and unusual opinions, but in order to understand her very varied method of invention, both playful and committed, we must refer not so much to a repetition of futurist tests, as to the anti-sexist themes of the difference between the sexes, psychoanalysis applied to language, and oedipal archetypes. In her countless works and performances, what is invariably involved is a happy sexual liberation of words, with the help of refrains, stereotypes, riddles and a material dissemination of signs.