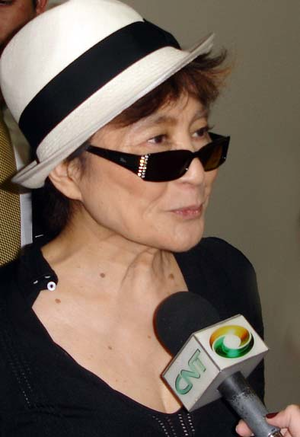 Yōko Ono was born to a well-to-do family in Tokyo that emigrated to New York in 1952, where she studied Poetry, Music, and Composition at Sarah Lawrence College. She met Edgar Varèse, Morton Feldman, and John Cage in the late 1950s and entered the realm of avant-garde music through her first husband, Toshi Ichiyanagi, a young Japanese composer. In the early 1960s, their Chambers Street loft becomes a venue that would welcome many artistic performances and concerts featuring La Monte Young, John Cage, and George Maciunas. She was actively involved in the Fluxus movement, created in 1961, an eclectic and fluctuating international community of artists defending the spirit of playfulness, deception, chance, a life-affirming ephemeral art that cannot be reproduced in time. The artist combined this approach with the theatrical ideas of Antonin Artaud, Zen Buddhism philosophy, and the actions carried out by the Japanese Gutaï movement. Hence, during her first performances, such as Cut Piece in 1964, she invited spectators to cut up her clothing until she was completely naked, a veritable "theatre of cruelty," which transformed the spectator into an active protagonist within the theatrical performance. She also wrote "film scripts" that put the nature of the medium of cinema into question, and where she distributed scissors to the public in order for them to "cut the part of the image on screen that they don't like." c'est tiré de Film Script 3, et c'est le contraire de ce que dit l'auteur(e) en français – "préférés vs. "don't like" She then made the Fluxfilms series of short films, assembled by G. Maciunas into a single collective work in 1966. Her film work fits into the Fluxus antispectacular aesthetic, with single-shot sequences stretched out during the projection using extreme slow motion, which makes it look like a single movement, a fragment of life was captured – such as the blinking of an eye in Eye Blink – which she infused with a monumental and timeless quality. During her Unfinished Paintings and Objects exhibition held in London in 1966, she met John Lennon and became his muse. On June 15, 1968, they organized their first "happening" together, Acorn Event: giving up on any idea of excess and spectacle, they created a sculpture-in-progress, by planting two oak acorns, one facing west and one facing east, expressing the union between the Western and Eastern worlds, their wish for peace between the two hemispheres, and the importance of environmental awareness. They composed a number of pieces and songs for piano-four-hands, including Revolution 9, which would appear on The White Album in 1968, before the creation of their band, the Plastic Ono Band, the following year. Ono's vocal performances, which vocalize the cultural schizophrenia that has afflicted her since childhood, torn between East and West, also reveal the importance that she gives to the body as a fundamental instrument, a vehicle for conveying musical emotions, a notion borrowed from kabuki theatre. In November 1968, the Unfinished Music N°1 : Two Virgins was released, with its famous album cover showing the couple posing naked; censored while the sexual revolution was in full swing, this photograph illustrates the protest power of the naked body, in the context of the hippie movement and the 1960s avant-garde. Following her wedding in Gibraltar in 1969, the couple organized a honeymoon in the form of a public event devoted to peace, the Bed-In for Peace, in the middle of the Vietnam War, chanting the anti-war anthem Give Peace a Chance. While bearing allegiance to the passive resistance tradition, Ono highlights the conceptual dimension of what seems like a performance that questions notions of identity, intimacy, space, and time. Towards the end of 1969, the couple launched an international advertising campaign promoting peace in 12 cities around the world – War Is Over (If You Want It). Happy Christmas from John and Yoko – followed by the invention of a nation living according to the ideals established in the song Imagine: thus, on April 1, 1973, they founded Nutopia, "a conceptual country with no land, no boundaries, no passports, only people," a country that belongs to everyone. While John Lennon's assassination in 1980 interrupted their fertile artistic and musical dialog, from then on Ono would be recognized as an accomplished pop artist in her own right, with albums like Walking on Thin Ice in 1980 and Season of Glass in 1981. She continues to work on her visual art, ever compelled by her devotion to peace, and which is celebrated in museums around the world, namely as demonstrated in the Yes Yoko Ono retrospective in Japan and North America, in 2000. In 2009, she was awarded the Golden Lion from the Venice Biennale. In 2018, she participates in the movie Isle of dogs of Wes Anderson, that won the Silver Bear for Best Director at the Berlinale 2018.