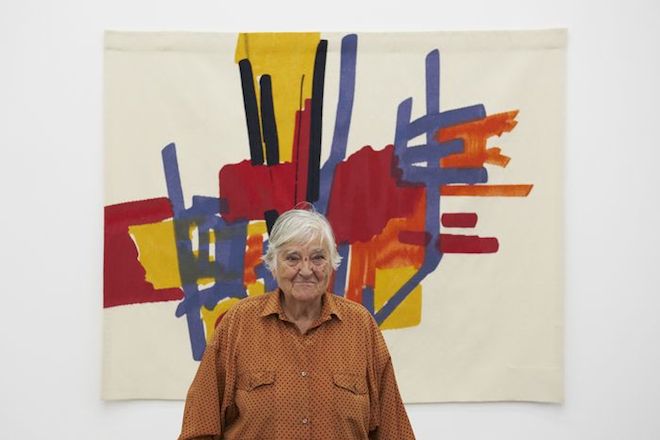 Prolific writer Etel Adnan has tried her hand at every literary genre: poetry, novel, essay, epistolary writings, autobiography. The daughter of a Muslim Syrian father and Christian Greek mother, she grew up in an Arab-speaking environment. She spoke Greek and Turkish, and yet was educated in French religious schools, which is how French became her writing language of choice. She also learned English at a very young age, which she would then put to use in most of her works. Perhaps this linguistic multiplicity is what brought her to first use painting as a means of expression: abstract colours and lines instead of words. She then enrolled in literature and philosophy studies in Beirut, Paris, and the United States, where she would then teach the philosophy of art. In 1975, the Lebanese civil war led her to write L’Apocalypse arabe, published in 1980 while she was living in Paris. In this book, she employed an original combination of different signs: words replaced by drawings, entire lines made up of points, arrows, or black rectangles, in order to express a reality beyond words. As war escalated, she wrote Sitt Marie Rose (1978), one of the first novels describing the Lebanese civil war from the inside, and now a classic of Middle Eastern literature. Her following works are largely dedicated to the conflicts riddling the Middle East, which she perceives as a wounded body. She is also sensitive to the sufferings of other peoples: Native Americans, Vietnamese, Black Africans, and is committed to keeping the traces of martyr civilizations alive (Irak, Andalusia, Byzantium).