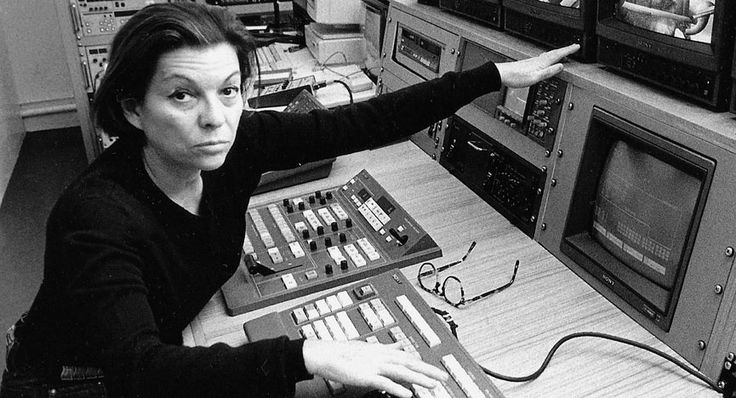 Born in Egypt to a Turkish family, Nil Yalter grew up in Istanbul where she taught herself to paint. In 1965 she went to Paris to familiarize herself with modern Western painting and took up abstract geometric painting. The events of May 1968, the Women’s Liberation movement, and another stay in Turkey in 1971, where she was distressed by the forced settlement of nomadic people, and her meeting with the ethnologist Bernard Dupaigne were all sources of inspiration for her work. In 1973 she was given her first solo exhibition at the musée d’Art Moderne de la Ville de Paris. She showed nomad’s tent titled Topak-ev, (“thea yurt) or nomad’s tent, now in the Santralistanbul, Museum for Contemporary Art in Istanbul. Drawings and writings on the outer panels explain the living conditions of the nomadic peoples in Turkey. In 1974 N. Yalter produced her first performance video, La Femme sans tête ou la Danse du ventre, during which she inscribed on her belly a text by René Nelli taken from Érotique et civilisation while swaying to the rhythm of Oriental music. In 1974–75 she created La Roquette, prison de femmes (Fonds national d’art contemporain, Paris) with the painter Judy Blum and video artist Nicole Croiset. The multimedia installation recreates the experiences of women prisoners on the basis of accounts given by a former detainee. During the 1980s N. Yalter continued to work on subjects linked with the displacements or subordination of people and produced a series of works on immigration and working-class people that reflected her communist commitment (with N. Croiset, Les Métiers de la mer, 1982). In parallel with these works, which might be described as “ethnocritical” or “sociocritical” art, she pursues much more formalist pictorial creation influenced by the Russian Constructivists, in particular Kazimir Malevich. Painting and multimedia are united in her Sound of Painting (2008).