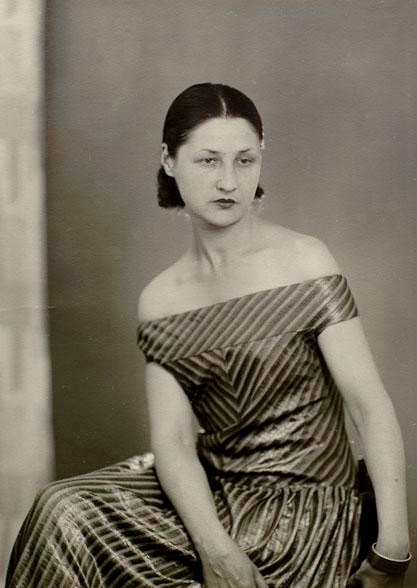 A “scandalously” beautiful and eccentric figure of Surrealism, celebrated in the portraits her husband and surrealist friends made of her, Valentine Penrose is predominantly known for poetic writings driven by her bohemian love of nature and her interest in occultism and Eastern philosophies, which would bring her to travel and temporarily convert to Hinduism, among other religions. She left her husband in 1936 to live at the ashram of the Spanish guru Count Galarza de Santa Clara until 1939. An independent and stubbornly unconventional spirit, she was also outspoken about her lesbian relationships and enlisted in the French army as a third-class soldier in Algeria in 1942. Her writing, from her first poems – Imagerie d’Épinal (1926), Herbe à la lune (1935), prefaced by Paul Éluard – to her volume of poems and collages Dons des féminines (1951), is both instinctive and arcane, and full of mystical effusions. Éluard described it as a “poetically clear language, a quick language that evades reflection. An unreasonable, indispensable language”; a “collage-writing”, according to Georgiana Colvile, made of quick and unexpected associations and of inversions; a writing of visual hallucinations similar to the Surrealist’s automatic use of techniques like collage, smoke drawing, or rubbing. Esotericism is the main characteristic of her major written work, the half-fictional, half-historical tale The Bloody Countess (1962) hailed by Georges Bataille, which tells the legendary story of a sadistic and monstrous woman who would later inspire the film Countess Dracula, directed by Peter Sasdy in 1971. Even more so than its use of myth and otherworldliness, erotic sensuality and the alchemic principle of metamorphosis (with the ever-present principles of feminine and masculine) place V. Penrose’s work in a circle of personalities that remained on the fringe of Surrealism, such as Alice Rahon*, Frida Kahlo*, and Claude Cahun*.