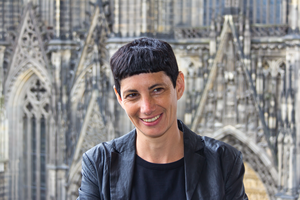 Yael Bartana studied at the Bezalel Academy of Art and Design in Jerusalem followed by the School of Visual Arts in New York. The rituals and perpetual work of collective memory that build a national identity, as well as subjective involvement and individual adhesion to public images are the principal themes of her work. Many people discovered the artist through Manifesta 4 in Frankfurt in 2002, where she presented Trembling Time (2001), a video shot from a highway overpass, showing a civic and military ritual: a moment of silence commemorating the fallen for Soldiers Memorial Day, which paralyzed the dense night traffic of Tel Aviv. At Documenta 12 in Kassel, Germany, in 2007, her video Summer Camp revealed a new direction in which she mixes the aesthetics of propaganda films from the 1930’s with the various movements that have helped found Israel (European anti-Semitism, colonialism, socialism and Zionism.) In 2011 her trilogy And Europe Will Be Stunned, was presented at the Polish pavilion at the Venice Biennale. Bartana continues to monitor the Israeli-Palestinian conflict through the prism of the complex relationships between European and Polish Jews in the era of globalization. Her videos and photographic work have been shown in solo exhibitions at the Van Abbemuseum in Eindhoven, the Tate Modern in London, Modern Art Oxford, MoMA PS 1 in New York, and the Moderna Museet Malmö among others. In 2010 she was awarded the prestigious English Artes Mundi prize. Nataša PETRESIN